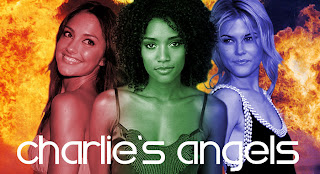 I really wanted to like this show but I was also aware going into it that it could turn out to be cheesier than a convention of dairy farmers, because let’s face it, we’re not dealing with a HBO series’ premise here, and its forebear, while a warm and fuzzy standout from my childhood viewing, is, well, laughably bad much of the time (that said, I will defend it to the death! Ah nostalgia, you make us do strange things.)
Now I have watched the first episode, all I can say is that I feel dumber from having been exposed to it to a degree I can’t even begin to describe.
This is my original hopeful take on it, admittedly written after just viewing the trailer:

MY TAKE : I really want this to be edgy, sophisticated and clever, and a great revival of what was admittedly cheesy but fun pop culture junk food, but instead I fear it could end up going the way of Beverly Hillbillies the movie, or Bewitched the movie. The one thing that may stop that happening is that Drew Barrymore is executive producing, and she was behind the two revival Charlie’s Angels movies that, while they were by no means perfect, had an uber-cool feel and look to them, and if that sensibility is brought tob this show it may rise up above some the cloying lines that found their way into the trailer i.e. when asked if they’re cops, one of them replies “No, we’re Angels”. Here’s hoping the writers can remember that good writing is still required to underpin even the cheesiest of shows.

So now I have seen a full episode, how do I feel? Well. it does have it’s moments. Despite a rather predictable script (again, hardly a surprise since subtext was never an Angels strong suit), the cast valiantly try to inject modern edge and glamour into the show, with the briefings now involving iPads, outing to hip, stylish nightclubs, and a bright, loud soundtrack that screams up-to-the-minute cool. Sadly their valiant efforts can’t make up for a limp script that plays out like a reject from a 1970s script slush pile. Oh look, the baddies can’t shoot! Oh wait, they randomly shoot in the water and fly off in the helicopter pronouncing the Angels dead mere moments before they surface, gasping for air. Oh wow, the baddies are inept at every turn! Oh, and awww they’re a family. How very Hallmark of them.

Yes, I know I must sound like the Grinch who stole pop culture fun right now. Surely you know it’s intended to be fluff, lightweight escapist entertainment to delight us, and allow us to put our brains into neutral and just….RELAX. Yes I get that, and there is absolutely nothing wrong with it, and as a person with a demanding job I like nothing better sometimes that eschewing the complexity of HBO and wallowing in simple, escapist viewing. But, and you can tell me you didn’t see this coming, even the simplest fare, to truly have any longevity, must have some substance to it, a backbone of complexity that upholds the frothy confection wrapped ever so deftly around it.

It’s possible that the producers of this show may overcome these deficiencies, and get over their need to ape the original series’ lack of narrative complexity (yes despite my vociferous defense of it, storylines were not its strongest selling point, let’s be honest) but somehow I doubt it, and I think my concern that this is a show consumed with form over substance is being borne out.