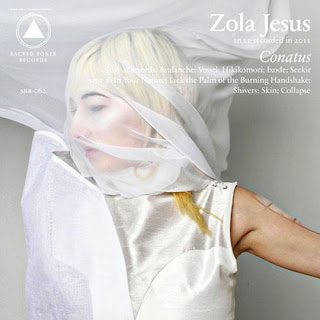 Zola Jesus, or as her mum calls when she’s angry, Nika Rosa Danilova (from oft cold and frigid Wisconsin which explains the Icelandic sensibilities), is a woman who, like Kate Bush and Bat For Lashes, treads her own musical path, heeding not the siren song of mainstream ordinariness.

And that my friends is a very good thing for all of us.

Her music, which dares any one genre to come and call her their own, possesses a haunting pop-influenced spirit that is almost more art than music. But even so, it’s not pretentious or precious; just heart-achingly beautiful.

It is entrancing music. It is anthemic in parts, moody and obtuse in others, but always rich, full and powerful. Listening to it, you can imagine her standing on a mountaintop, drums in hand, hair flying wildly behind her, calling out to the gathering dark. Yes, much like a weird Ukrainian Eurovision entry with the strange grandmother and her pet goat who walks on at a completely narrative-challenged point. But with music that is so good, so unusual, so pagan and tribal, that it connects with something inside of you that wants to join her on that windswept snowbound mountaintop. 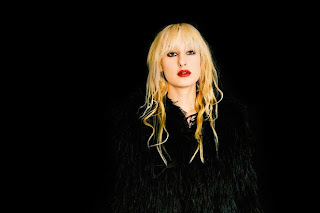 Yes it’s animalistic . But it’s also passionately beautiful music. It’s been described by some as electro-industrial-pop-punk which is the world’s way of saying we couldn’t categorise you if our lives depended on it but we like your music more than we can say. “Seekir” is the song that most categorically sits in the pop firmament. It starts off with a sparse, almost ghostly chant before building to the sort of beat that would be happily at home on a retro dance floor. Granted a song that houses two such discordant musical directions should sound like some Dr Moreau-like sonic abomination but it doesn’t, and it is testament to the giftedness of Zola Jesus that it is captivating beyond reason.

In contrast, but just as much a delightfully odd melange of pop and otherworldly darkness, “Hikikomori” is all softly pounding synth beats, with Zola’s powerfully yet almost voice fracturing through the melody like a mourning spirit seeking solace by calling out its pain. It is starkly poignant and yet beguilingly poppy.

And that is what sums up Conatus perfectly. It defies genres, skips merrily between remote but accessible ice-cold melodies and almost danceable pop, and possesses an elegance and grace counterbalanced by more raw animalistic sensibilities. It is a glorious cocktail of contradictions, and one of the most unique albums you will ever own.

Your music collection will never be ordinary again.