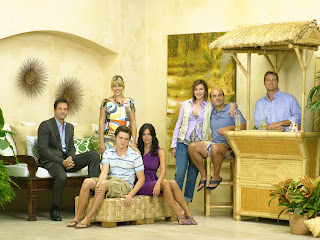 Yes I have declared Cougartown to be the funniest show on TV.

Why is that you say, wondering why I would pick a show that sounds like it’s about sun-bronzed, women in their 40s desperately chasing after much younger men? Because it isn’t about that, my friends. No, it is not, and shame on you for seizing on the most obvious meaning.

What it is about, if you care to check, is a group of close friends, some romantically involved, some most definitely not, who live in deepest, sunniest Florida, and who despite their best efforts, don’t have it all together. Or do they? That’s the eternal question. They are not even remotely conventional in one sense, having raised bulk red wine drinking and the throwing off coins into a metal tin (Penny can!) into high art. I am sure, to judgmental casual bystanders, their lives must look like a comedic shambles.

But dig a little deeper, and you’ll find that here are people who have thought about life more than the average person, and while their conclusions may be quirky and not what a ‘normal’ person would admit to, they do make sense if you think about it.

(The photos that follow were tweeted out by the cast last week and show them finishing up filming on season 3, which has been delayed by the network and whose success is critical to the show’s ongoing survival.)

What is so engaging about the show is that it isn’t dumb humour. It isn’t predicated on sloppy jokes held together by sticky tape and a few perished rubber bands, with punchlines so obvious they have their own GPS coordinates. No, what this show excels at is humour that springs from the characters themselves and the way they interact with each other.

Not only does this give the show a delightful heart and soul lacking in meaner, lazier shows, but it’s clever humour that ducks and weaves in all sorts of crazy directions that you’re simply not expecting. In a world of media predicated on the lowest common denominator, where everything is flagged way ahead, this is a giddy joy, and pure pop culture delight.

Do yourself the favour of all favours. Check out a show that is original, creative, clever, FUNNY, full of humanity, and everything a fully-realised sitcom should be. Watch because if you don’t it will go the way of the Dodo, 78 records, and Kim Kardashian’s marriage and that would be a loss for everyone.

Most of all though watch it because Cougartown is what TV sitcoms should be – FUNNY, intelligent, and a delight for a comedy-loving soul.