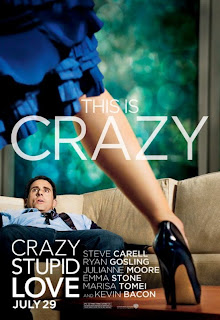 What a perfectly constructed, beautifully and intelligently written, and brilliantly acted movie. It follows a series of threads that examine love in all its crazy, stupid glory – Cal Weaver (Steve Carell) and his wife Emily (Julianne Moore), high school sweethearts who face major changes in their relationship after 25 years; a bar Casanova, Jacob Palmer (Ryan Gosling, with abs so perfect they are worth the price of admission alone, and leads to a classic line being uttered by his companion of the moment) who after bedding hundreds of women, and making over Cal into a middle-aged stud of sorts,  finds love when he least expects it, throwing him completely; Hannah, an up and coming lawyer who find her expectations of love turned on their head, leading to momentous changes; and Cal and Emily’s son, Robbie (Jonah Bobo) who falls in love with a girl 4 years older than him, leaving him convinced he has found his soul mate for life.
Yes, there is a lot going on, but it is one of those almost perfect movies where the most exquisite blend of script, production and acting comes together to create a whole so engaging, rich and rewarding that you can scarcely believe it exists, much less in the current sequels and remakes driven insanity of modern Hollywood. It never feels hurried, overdone or crowded and everything plays out with an elegance and restraint you simply don’t see in many movies anymore.
Such glowing praise, you gasp. Are you sure you haven’t waxed just a little too lyrical? For once, and I am saying this as an extrovert prone to emotionally extravagant reactions at times, it really is worth all the superlatives I can lavish on it. That’s not to say it’s perfect – the ending is a tint bit twee and so neat that any Obsessive Compulsive Disorder moviegoers will be sending in their cinema seat in quiet rapture – but it whenever it threatens to veer into cliche and serve up that which we have seen far too many times before, it sidesteps neatly away, throwing up a witty line, or wry observation, or post modern self-referential quip that sends it hurtling off boldly where no romantic comedy/drama has dared to go before. 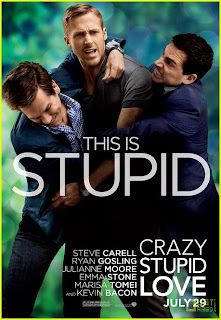 There are three scenes in particular where the script writer, Dan Fogelman, pulled the anti-cliche ploy off perfectly, to great effect. The first time, after a particularly unpleasant and publicly embarrassing argument between Cal and Emily at their son’s parent/teacher night, where the estranged couple look to be close to reconciling before things go awry, Emily drives off leaving Cal standing alone. At that point, it begins rains, and just as I was sighing that the seemly perfect movie has resorted to such a cliched device, Cal sighs, sticks his hands in his pocket, and mutters “This is so cliched.” Yes Dan used a cliched plot effect but by referring to it directly, and in keeping with Cal’s generally feeling that the world is against him, it instantly became far less cliched and reinforced the sense that any hope of reconciliation is slipping from Cal and Emily’s fingers.
The second instance of evading cliche with aplomb occurs when Cal has constructed a miniature golf course in the couple’s backyard to evoke memories of the dates they used to have when they were high school sweethearts. With the help of two of their kids, Robbie and Molly (Joey King), they surprise Emily who, in any other movie would be swept up in the grand romantic gesture, realise her heart belongs only to Cal (something she is close to doing anyway in  a very believable progression) and fall into his arms. It’s at this apparently predictable juncture that Dan throws a farcical wrench in the works, employing the arrival of characters, the revelation of whose identities would be a major step into spoiler territory, who send events careering off into everywhere but happily ever after land. Its masterful, fun and advances a number of the relationships with exquisite dramatic and comedic perfection.
And finally at the very end of the movie, with the whole family gathered for Robbie’s 8th Grade graduation, and Robbie’s speech as a salutatorian sliding into an emotional anyss, Cal steps in, and gives the sort of speech that would normally make you wince, but somehow comes across as heartfelt and almost believable. (I say almost because the circumstances simply wouldn’t lend themselves to those events but then you have to give movies a certain amount of belief suspension, or they’d be stuck filming reality all the time, and that just ain’t fun.) Yes, the ending is a tad on the neat and tidy side, but it also leaves enough things hanging out to dry that you can’t be quite certain that things really will play out that easily, and it proves once again what a masterful script this really is. 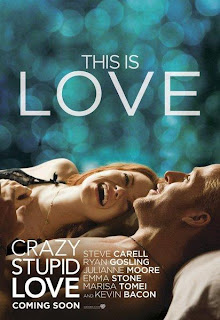 What is most refreshing about this movie is how real, and yet hopeful and optimistic this movie is. It knows life is seldom as perfect or lovely as we want it to be, and keeps itself very firmly anchored in that appreciation, never losing sight of the grittiness of life. But it also dares to suggest that if we want the beautiful things hard enough, and are prepared to fight for them, and not simply settle for what drifts towards us, that good things can happen, dreams can play out, and we might, just might, find the love of our life, and live happily ever after.
In a non-cliched, well-scripted kind of way, of course.