This movie, starring Ryan Gosling as Driver (you never really learn his name), who drives stunt cars by day, and getaway cars by night, was not at all what I expected.


I was aware going in that it is not a Fast & Furious clone, occupying a place in the movie pantheon that is far more intelligent and nuanced than any other those car-focused movies. What I wasn’t aware of was the degree of violence that suddenly explodes in a movie that is largely made up of brooding, quiet menace, bubbling along quietly till it must find someplace to escape… 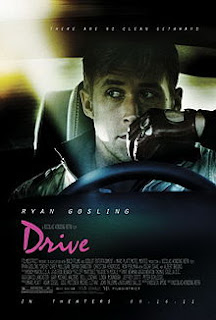 … and escape it does with a fury that leaves you breathless, but which, in the context of the movie, makes perfect sense given how well the world the exquisitely drawn characters live in, has been conveyed. It is a world with few mercies, governed as it is by the struggle to survive, and for much of the first part of the movie, punctuated only by the most meagre portions of dialogue. But so beautifully written is it, and finely acted, not just by Gosling, but by Carey Mulligan as Irene, and Bryan Cranston as Shannon, Driver’s close friend and employer, that dialogue seems almost superfluous. An expressive glint in the eyes here, or a weary wordless walk to a front door there, gives a richer understanding of the characters, and their sense of dissatisfaction with the lives they lead than mere words I think could do. Certainly Gosling’s taciturn Driver only speaks when absolutely necessary, but it becomes abundantly clear very quickly who he is, what he values, and in the case of Irene, and her son Benicio, who he loves.

This is a movie for those who like to subsume themselves totally in a world, with characters who live and breathe with a vitality that takes your breath away. This is not to say all of whom are likeable, or make perfect decisions, but you can’t miss them, and they aren’t easily forgotten. So well drawn are these characters that, though much of what they do and say is understated, you find yourselves utterly absorbed in their stories, and heartbroken when everything goes to hell.


The visual style too is distinctive. The colours are subdued, even in the middle of the day, and both the interior and exterior worlds look washed out, which makes the violence, when it arrives, all the more arresting. It was interesting too to see the use of 1980s fonts and pink pastels, and even music evocative of the period.

This is a movie that brings to life the car-obsessed darkness and glamour (in equal measure) of LA, that speaks of the hopes and dreams, and the end of all of them, of people with very little margin for error, and which conveys a slow burning then virulent intensity, which makes for a movie that is not even remotely what I suspect most people expect when they go in to see it.


And that, trust me, is a very good thing.