Grimm is every bit as good as I hoped it would be.
Its basic premise is that fairytales are retellings of events that really happened. That werewolves, witches and the like are not simply the product of people’s overactive and fearful imaginations but real, dangerous and capable of causing great harm. In essence, they are cautionary tales, warning a vulnerable humanity to beware of the magical creatures that mean us great harm.
This is precisely why the Grimm brothers, some two centuries ago, collected all these stories together, and published them in written form. Previously they had been handed down via word-of-mouth recountings over camp fires but now a mass audience could reads them, and appreciate the stories anew.
Standard history has it that the Grimm brothers were German academics and linguists, and quite close in age, desiring nothing more than bringing the collected folk wisdom of a continent into one easily accessible volume. Grimm, however, argues that they began a secretive dynasty that has stretched from the 18th century to the present day, dedicated to keeping humanity safe from those “things that go bump (and howl, and screech) in the night”. 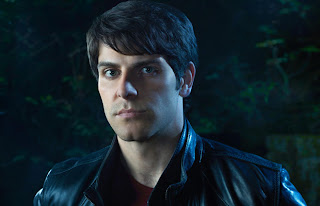 The protagonist of the series, Nick Burkhardt (David Giuntoli, above) is happily in love with his fiancee-to-be, Juliette Silverton (Bitsie Tulloch), blissfully unaware that he is the heir to this most unusual if family lines. Working as a police detective, he has his hands full with the worst of what he thinks the world has to offer when his Aunt Marie turns up unexpectedly. In one short conversation, before they are attacked by a scythe-wielding Reaper assassin (whose day job is as an accountant showing the show does have a subtle but highly welcome sense of humour and isn’t all intense darkness and light), she makes him aware of his true heritage.
It’s news of course that sends him reeling, but it does make sense of the fact that he keeps seeing people of the street, who to all intents and purposes are human, momentarily display the most monstrous of forms. What he finds out from Aunt Marie before the Reaper’s attacks leaves her in a come in hospital is that those nightmarish flickers he is seeing are actually the creatures’ true forms and that as a Grimm, he is burdened with not only seeing them but stopping them doing great harm.
And it is a burden as his Aunt Marie, who raised him after his parents were killed (he thought they had been killed in a car accident), makes very clear. Of course as he processes earth-saking news like this, his first concerns are for those close to him, and whether it is possible to escape his destiny. He discovers that his destiny is set when he encounters, and to his astonishment, befriends a reformed werewolf (or a Blutbad), Eddie Monroe (Silas Weir Mitchell) who confirms that Nick is indeed a Grimm, that his calling is real, and that the creatures in fairytales are as real as the earth beneath his feet. Hell, he is now friends, and allies with one! 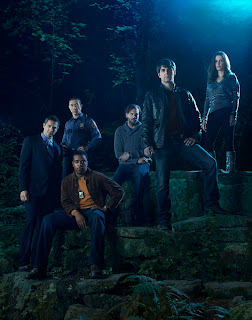 Still, grappling with his new role in life, he is called into a case with his partner, Hank Griffin (Russell Hornsby) where a female university’s body, clad in a red hoodie, is found torn to shreds just off a jogging trail. No one can work out what attacked her since the only tracks are those of a heavy hiking boot. But it soon becomes clear to Nick that his police work and his newly-discovered calling are merging into one as the culprit appears to be a denizen of the shady world of creatures previously considered by him to be myth and make believe.
Suffice to say, the case bears eerie parallels to Little Red Riding Hood, and when a little girl, also wearing a red jacket disappears, Nick realises his life will never be the same again.
Nor I suspect will my viewing schedule. This was a sterling pilot episode. In short order, it introduced the characters, gave us a sense of what life means to them and what they mean to each other, and then upends it tautly and with great drama, while somehow inserting a case to be solved into the mix. It’s writing of the highest order, and like any good pilot, hooked me in, wanting more. Much more. This is a show that is riding the current mania for magical realism, but doing it on its own unique and highly imaginative terms.
For a show about the supernatural, it does a more than credible job of injecting raw human emotion into the mix and the characters and relationships are given just as much time as the fantastical elements (or not so fantastical if you take the Grimm premise that they are as real as anything else we encounter in our lives) which bodes for the show. There is no point making a show about otherworldly creatures, and those who traverse the breach between their world and ours, if the everyday elements of the show are missing in action. There is ultimately nothing of any substance to relate to, and however beguiling the concept, viewers will desert the show fairly quickly.
Happily, Grimm avoids this trap, and does it with verve and sparking imagination. It is as wonderful as the three minute trailer last year gave me hope it would be, and I cannot wait to immerse in a world that is both as real, and as unreal, as any I have ever seen.