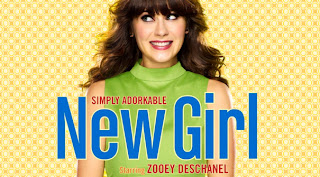 Well thank the TV gods – New Girl is as funny as hyped.
You’d expect it would be somewhat funny since it does star the comedically-talented Zooey Deschanel, who is best known as the flaky but good-hearted, if self-centred on again, off again girlfriend of Joseph Gordon-Levitt in 500 Days of Summer. She brings much of that neurotic, quirky persona to this role, as Jess, a teacher who, after a nasty heartbreak moves in with three straight guys she finds on the internet. They find her unusual behaviour, such as obsessively watching Dirty Dancing for days on end while sobbing into mountains of tissues, or inventing a theme song for herself on the spot, disconcerting, but something about this energetic young teacher attracts them enough to take her in as their new house mate.
Let’s be honest. The show revolves primarily around Zooey Deschanel, and her gift for Lucille Ball-esque goofiness, and that is not necessarily a bad thing to begin with at least. Frasier started off as a star vehicle for Kelsey Grammer, who is a gifted actor and was a point of familiarity for viewers getting used to a new show. However, it sensibly, and quickly evolved into a superb, cleverly-written ensemble comedy than ran for 11 years with characters who were very bit as fleshed out and well-developed as Frasier himself. 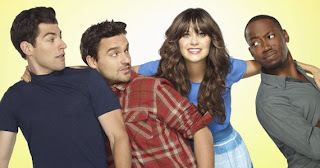 I hope much the same thing happens with this show. Don’t get me wrong. The two episodes I have seen so far are very funny and promise a consistently funny show to come. The writers have wisely given the three male house mates some mild quirks of their own to save them from simply being the straight men to Jess’s adorable quirky take on life. Let’s hope though that they continue to pay as much attention to all of these characters as they do to Jess since while her idiosyncratic musings on life, and one-of-a-kind approaches to heartache, dating and love are hilarious, the show could become a one-trick pony if it relies on Zooey Deschanel formidable comedic talents alone.
I doubt though they will make that mistake. Frasier became as well-loved, and popular as it was because all of the characters were as watchable as Frasier and drew elements out of Frasier that a weaker sitcom simply couldn’t have managed. In the same way, I expect the ensemble will grow around Jess, matching her overwhelmingly unique character with characters who accent and enhance her and are every bit as compelling as she is.
One thing I particularly liked is the way it countered any over-goofiness with some touching moments which gave it a depth I wasn’t expecting, at least so soon. It’s off to a very promising start and if reports from the USA are anything to go by, it maintains and builds on this to great effect.
11 years for New Girl? Too early to tell but this episode lays the foundation for a show that has the potential to keep us laughing for quite a while to come.