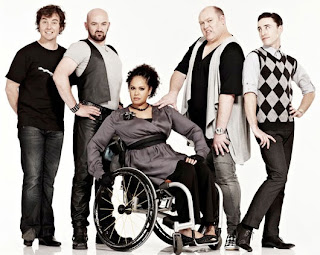 The ABC debuted its new sitcom, Outland, last night, and it was, in a word, HILARIOUS.
Yes in capitals thank you. It was that funny.
Which is what you hope for and expect when someone dangles a juicy new piece of comedy tantalisingly close to your viewing schedule. Sitcoms are supposed to be funny, amusing looks at the lives of usually fallible people, all neatly bundled up in a half hour package of (hopefully) ceaseless mirth. Outland clearly got the memo because it is, yes, HILARIOUS (there are those much deserved caps again).
But Outland went one better. In 30 short minutes, which whipped by in a blinding instant thanks to an episode so well put together I was utterly engaged almost instantly with it, they managed to introduce us to five beautifully drawn characters, their lives, flawed loves, and their reason for being – their “homosexualist science fiction enthusiast” group. 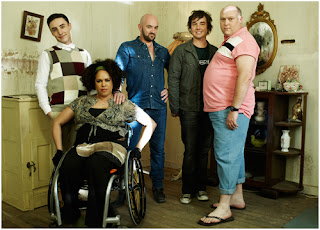 Yes, or in other words a “gay sci-fi geek” group, which was the tag given to them (and just as quickly rejected) by an incredulous interloper, Dylan, who managed to get caught up with the five loveable misfits by virtue of being in the house of his date-for-the-night, Max (Toby Truslove) when everyone else unceremoniously arrived without any warning.
Dylan eventually makes his escape, but not before witnessing the quirky mayhem caused by five good gay friends who happen to be, gasp, sci-fi nerds. So much of the humour comes from the fact that Max, wanting to make sure that Dylan sticks around for longer than one date, desperately tries to hide the fact that he likes science fiction so much. Even worse (in his mind at least), that he is in a group that does nothing but watch, talk and get enthused about just about every science fiction show, high profile and utterly obscure, ever made.
He has packed away every last vestige of his closeted sci-fi nerd lifestyle when the gang arrive and proceed to blow his cover in spectacular fashion, utterly oblivious to the fact that Max is trying hard to keep a lid on his secret shame. His friends – Fab (Adam Richard), Rae (Christine Anu), Andy (Paul Ireland) and Roby (Ben Gerrard) – are deliciously, delightfully, utterly oblivious to the havoc they are creating and do their best to convince Dylan of their merits of their obsession. 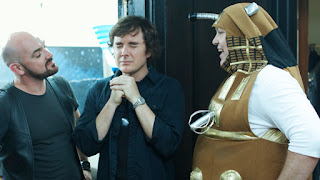 Traumatised by being outed by his friends as sic-fi nerd, Max has one of his panic attacks, and has to be talked down “off the ledge” in his bathroom by good friend Fab who he went to high school with, and who manages to get himself through an entire beauty routine while he calms Max down. Those scenes alone are worth the price of admission, especially since Fab is dressed in Max’s giant Dalek costume (don’t ask but it’s, um, HILARIOUS).
By the time Max emerges, Dylan is ready to bolt, it emerges that no one really knows what Roby’s name is, Rae is mourning the end of her relationship to her firebrand girlfriend, and Fab and Andy are holding court in their own inimitable ways. It is chaos, glorious chaos, and oh did I mention? HILARIOUS.
Written by the hugely talented Adam Richard (who co-stars) and John Richard, the first episode is a more than worthy start to a series that promises a sidesplittingly funny look, with lashings of heart and soul humanity at its core, at the eternal quest of just about everyone on planet earth – to be accepted for who they are, fear that they won’t be, and desperately wanting somewhere to truly belong. As a gay man and sci-fi nerd, I identified with this, of course but it would speak to anyone who’s ever felt marginalised by society and uncertain of where they truly fit in.
With that sort of theme, that everyone can relate in one form or another, it’s bound to find an audience and do spectacularly well. Oh, and also because it’s HILARIOUS.

Also check out this great interview with the co-creators of the show.