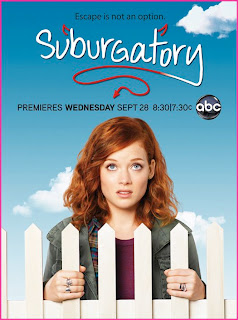 There is hell, and then, as this show posits, there is Suburgatory.

It is a name so perfectly apt, I desperately wish I had come up with myself. Along with the overly-manicured setting, Stepford Wives-like personalities, and the preternaturally clever teens who trade sophisticated witty lines like they imbibed dictionaries, not milk, as babies.

It is the most witty, spot on look at the suffocating bonds of conformity at all costs that I have seen in some time and laugh-out-loud funny into the bargain (the scene where everyone is watering their lawns in unison in exactly the same way is comedy gold, and also deeply unsettling at the same time). But somehow in the midst of all the razor sharp satire, and dialogue so sharp you may cut yourself on it if you lean too close to the TV, they manage to retain little touches of humanity that stop the show from descending into one-joke parody.

The relationship between the protagonist, Tessa Altman (Jane Levy), who is uprooted to the weirdness of suburban life by her single dad, George Altman (Jeremy Sisto), is a case in point. While it’s fraught at times, it is ultimately warm and affirming, without being cloying and sentimental. It’s a nice balance, and one of the most believable father-daughter relationships I have seen portrayed in an American sitcom for some time.

Sure, they have their differences – in this episode their argument, as witty and clever as any other discussion they had in the episode, centred on how much Tessa should confirm to the plastic ideal around her. She was resisting mightily while her dad, out of concern for her acceptance in her new community, wanted her to try harder. In the end they compromised somewhat but it wasn’t some mushy harps-and-strings touching moment but a frank and honest recognition of what mattered to each of them.

Way to go Emily Kapnek, creator and writer of the show. It is refreshing to have humour spring from reasonably authentic relationships especially given the setting, by necessity given it’s a satire, is hyper real. The colours are super bright. The lawns cut precisely and luminescent green. Everyone is coiffed and tailored like newly minted store mannequins on Rodeo Drive. It’s eerily perfect and this is what unsettles Tessa, uprooted from the gritty imperfection of cacophonous Manhattan, so much.

And it’s why her attempts to make some sort of peace with her new home don’t go smoothly at all. It’s partly her reluctance to given an inch and partly the suspicion on behalf of everyone she meets that she’s a lesbian (she wears non-heterosexual shoes, according to her school “buddy”, Dalia Royce – Carly Chaikin – the most popular girl in school, and Tessa’s rival). That perception, which isn’t accurate by the way – her school counsellor by contrast, Mr Wolfe (Rex Lee) is as gay as they come – is a fun recurring joke through the episode and serves to underline that even the tiniest difference doesn’t go unnoticed by the good folk of Suburgatory, and is immediately seized upon as some sign of extremist behaviour. (It explains the current race for the Republican nomination for President and why extremism is more the currency of debate than good reasoned common sense.)

The episode finishes off though with Tessa making a small but important accommodation with the new paradigms around her. She accepts, with much reluctance, a pink frilly bra from Dalia’s mum, Dallas (Cheryl Hines), only to admit to herself that “it is by far the prettiest thing I own.” It is one tiny step but a significant one. I don’t expect Tessa will yield much of what makes her distinctive because that’s not who she is, and we need her outsider’s view of things to stay undiminished.

But for her to survive in this brave heavily-produced land, she needs to cede some ground, and given she doesn’t have a mum, it makes sense it would be to Dallas, who, again refreshingly, isn’t some plastic cliche but a fully fleshed out human being.

This show is extremely promising – it is funny, so cleverly written, with actors who know how to deliver the lines perfectly, and a setting begging for more and more satire. I can’t wait to see what is pilloried next and I have no doubt that I will be laughing all the way.