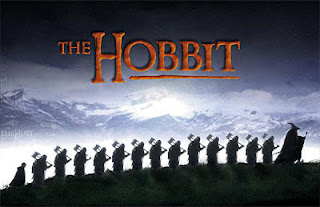 It appears that shooting on the Peter Jackson helmed The Hobbit movies is much more advanced that I thought. In fact enough footage has been shot that they have put together an awesomely great trailer that recalls the wonder and excitement I felt as I watched each of the dazzlingly good Lord of the Rings movies.

The trailer features Gandalf the Grey (Isn McKellan) who recruits a reluctant Bilbo Baggins (Martin Freeman) to go on a quest with 12 dwarves (who, if the footage is any guide, love a good party and proceed to make themselves quite at home in Bilbo’s house) to reclaim Lonely mountain and its treasure from the dragon Smaug.

I know part 1 of The Hobbit won’t be released till Dec 14, 2012 but I cannot wait to see it and I am thrilled that  Peter Jackson’s imagining of J. R. R. Tolkien’s world will be back as a part of Christmas holidays for the next three years at least!