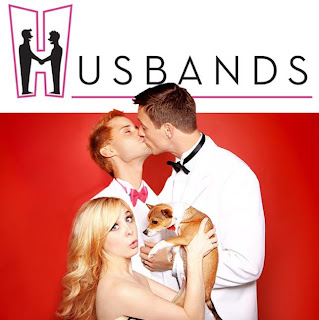 Zing! Pow!
How can something so hilarously funny, with one liners I am going to have to memorise if my life is to be worth anything, be simultaneously so insightful, articulate and warm-hearted? I have no idea, but the team responsible for this gem, including the very talented Jane Espenson (Buffy the Vampire Slayer, Firefly among others) have succeeded in crafting just such a clever piece of visual pop culture, and then some!
The series, with each episode roughly about two minutes long (perfect for a short commute – trust me, it lifted mine out of its usual humdrum-ness this morning – or for gainfully occupying those pesky ad breaks), stars Brad Bell (co-writer and creator) as Cheeks, an out and proud gay man of long standing who has spent many years daring America to like him, and Sean Hemeon as Brad Kelly, a more conservative pro-baseball player who only walked out of the closet a scant year before, as boyfriends of only six weeks standing, who end up getting married in Las Vegas one drunken night on the day that federal same sex marriage laws are enacted in USA. (There is also a cameo by the wonderful Nathan Fillion, geek god, and my first choice as a news reader too.)
Horrified at first at their predicament, they quickly decide that they must stay married for the sake of gaydom generally, not wanting to be the poster boys for gay divorce, a noble commitment that morphs into the dawning realisation that staying together might be the greatest adventure of them all, laudable social goals aside. The duo, who come across as totally believable in every facet of their personalities, and lives, are aided in this giant leap into the gay unknown by Cheeks’ best friend, Haley (Alessandra Torresani) who’s outrageously funny and over the top without being a parody, loves Scotch O’Clock, and commits herself in one scene of pure comic gold to being their life coach, writing her plan for the happy but nervous couple with mascara on a taco chip. 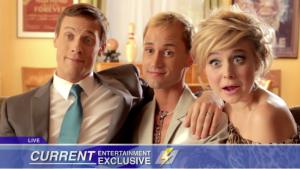 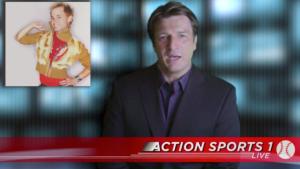 The absolutely inspired one liners aside, what sets this wonderful series up on a pedestal all of its very own, is the way it explores what it means to be a gay man in a decidedly straight world, in a way that doesn’t seem patronising or contrived in any way (no mean feat given how easy it is to portray gay characters in any show as vapid, fluffy balls of glittery silliness with no real humanity to speak of), which is accomplished primarily by focusing on the fact that here are two people, in a situation neither expected, grappling with the sorts of issues any new couple would. After all, what do you do after saying ‘I Do’, drunkenly slurred or otherwise? Yes the series uses perfectly executed comedy to explore this territory – the perfect cast deliver an inspired script without a single misstep that I could see – but it is never at the expense of some profound observations, and it hits the mark pretty much every time.
I cannot wait for future episodes – episode 9 went live on the web site http://husbandstheseries.com/ today Australian time (Tuesday and Thursday US time) – from a series that promise to keep being whippet smart, funny and packed full of wry social commentary. You can’t miss this people!