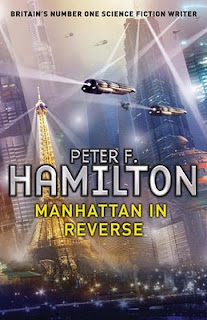 Britain’s premier writer of grand epic sci-fi has returned with his first collection of short stories since 1998’s A Second Chance at Eden. Of course calling any of the stories ‘short’ isn’t entirely accurate; the first story in the collection, ‘Watching Trees Grow’ goes for almost 90 pages, and the author is the first to admit in the books introduction that he doesn’t usually observe the traditional parameters of a short story.

“Looking through them I’d be the first to admit they’re not particularly short, with the exception of ‘The Forever Kitten’, which was written for the excellent Nature magazine, and had to be kept to less than 1000 words. I can do it, but that’s a rare event. Very rare.”

I daresay none of his fans are complaining. Peter F Hamilton is such a gifted writer than he could likely write out a telephone book in Swahili and we’d all attempt to read it. He has an impressive gift for expounding on ideas, especially to do with human nature and technology, that don’t leave you drifting off into unconsciousness at the sheer density of the ideas. He is endlessly imaginative, and expresses it so beautifully and with such fulsomeness, that you are subsumed into his storytelling so completely that you feel as if you are a citizen of one of the amazing worlds he has created.

This gift for taking an idea, and giving it a complete and multi-layered expression is on full display in this collection which was previously published in various anthologies and magazines. The only exception is the titular short story, ‘Manhattan in Reverse’ which features my favourite character from his epic millennia-spanning series about the Commonwealth, the indefatigable Paula Myo (who also features in ‘Demon Trap’, another story in the collection).

Each of the stories is suffused with a common theme in all of his work which is that mankind, though optimistic at heart, and more apt to reach for the stars than not, is fundamentally flawed. This doesn’t mean he has a pessimistic view of our future; in fact all of his stories exemplify a bright, shiny future where mankind has taken its gift for vaulting ambition and flown to the furthest reaches of the universe with it.

Rather, he nuances this optimistic view of the future with the idea that mankind, though clever and innovative, is also cursed with hearts that don’t always follow up our lofty dreaming of a better world with equally lofty actions. We may invent wormholes, travel to the stars, and find a way to seize eternal youth by manipulating DNA, but we can also still murder our fellow citizens (‘Watching Trees Grow’), and deceive those we once loved in the cruellest ways possible (‘Footvote’).

In essence, mankind is inherently flawed and no amount of shiny skyscrapers or interstellar travel can erase that. Again, not pessimistic, just factual. No amount of progress through human history has ever eradicated our lust for death, destruction and mayhem, and while we are now far more self-aware of others’ rights, and our responsibilities to uphold them, we can all be mindlessly petty and cruel too. This is all Peter F Hamilton is saying. Not for him the utopian idealism of Star Trek creator, Gene Rodonberry who believed that mankind’s ascent to the stars would bring endless perfectionistic bliss.
No, Peter F Hamilton is wise enough to realise that though life will improve for many people as technology takes us to places that previous generations couldn’t even begin to imagine, that mankind will not erase its less attractive features. It would be lovely if that happen, but history has shown that it likely won’t. That is, I think, what makes this author’s writing so compelling. It dares to postulate a flawed future. Not a utopian, or dystopian one; just flawed. It is real, visceral, and while you’re drawn into the exciting possibilities conjured up by his visions of the future, you’re reminded without malice, or jaundice, that we will still be us.
That actually doesn’t depress or disappoint me, and makes the epic short stories, for that’s what they are, all the more compelling. They are real, and grounded even as they talk about us soaring to the stars, and it’s that inherent humanity, and his pragmatic view of what it is and isn’t capable of, that makes the stories in this collection so rich and rewarding.
That, and compelling characters, simple but intricately realised narratives, and an innate ability to tell stories that draw you in and do not let go till they reach their always satisfying conclusions. It’s a great way to spend your present, and even, dare I say, your flawed future.