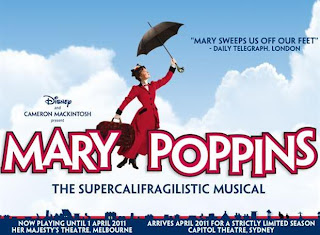 Chim-chiminey, chim-chiminey, chim-chim-chiree!
Who doesn’t recognize this joyful toe-tapping tune? It is the melodic heartbeat of Bert the Cockney chimney sweep and jack-of-all-trade,s and his fellow denizens of the rooftops of Edwardian London as they whistle and trill their way through an exhausting and dirty job. But you would never know that from the way they dance and twirl and celebrate life and that is exactly Disney’s intent. Take the dark and distasteful – in the case of Mary Poppins, spirit-crushing class divides and poverty and the struggle to survive day to day – and make it candy-coated fun where everyone smiles and everything works out. It is an approach that has worked handsomely for the home of Mickey Mouse, but one that P L Travers, author of the book Disney drew from, detested as a travesty of her book. It took a book that addressed the ugliness of class-stratified society, and emotional repression, and duty over happiness, as much it symbolised hope in the form if the titular Mary… and made it all too pretty and nice.
So how close is the musical to the Disney version? While familiarity with the Dick Van Dyke/ Julie Andrews version will mean you know many, but not all, the songs, and much, though again not all, of the storyline, the two are not the same animal. For a start, P L Travers refused to countenance a musical being created unless it was more in line with the book’s themes, which is why the musical, though light and joyous in a way that will sweep you to an undeniably emotionally buoyant place, is also shades darker than people may be familiar with… and this a very good thing. It means that the brightness of Mary Poppins arrival at the Banks home in Cherry Tree Lane, and the transformation she brings to bear in everyone’s lives, makes much sense given the darkness it replaces. It’s true of anything – the light only makes sense when it’s contrasted with the dark, and too often, in an attempt to appeal to the widest possible demographic, film makers, or the creators of musicals, will reduce the shades of darkness till you wonder what all the fuss of the transformation is about.
This is, of course, not to suggest that the musical is a bleak dystopian vision of a bygone area in London, leavened only by some magic here, a light bright song there, and Mary Poppins working her charm pretty much everywhere she goes. It is, in fact, a delightful journey full of songs, extravagant dance sequences, deliriously imaginative fantasy sequences (I adore it when they meet Mrs Coory in the park and sing and dance their way through the wide-as-a-cheshire-cat smile-inducing joy of supercalafragalisticexpialadoshus) and characters that are a delight to spend time with. But what it does do is delve far more into the cold initial emotional remoteness of Mr Banks, the estrangement the children feel from their father, the less palatable elements of capitalist Britain in the early twentieth century, and most remarkably, into the less attractive elements of Mary Poppins character, something P L Travers felt was completely sugar-coated in the Disney adaptation of her book. I noticed quite clearly that Mary Poppins could be dictatorial (although benignly), and seemed unable to be trusted to stick around, or form meaningful lasting bonds (which meant Bert love for Mary stayed unrequited). 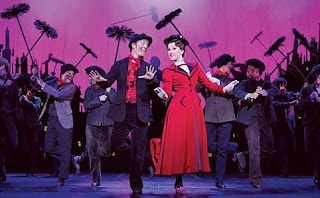 None of that is really countenanced in the movie but it is in the musical, and it makes Mary Poppins a far more well rounded and dare I say appealing character because she’s real. She does effect a magical transformation in the lives of the Banks family its true, and it is heartwarming and uplifting, but the exciting thing is it’s done by a person who is somewhat flawed. I know some people won’t like that, but a happy ending is all the more pleasing to me when I know the characters have gone to hell and back (or least as dark a vision of hell as an all-singing, all-dancing musical will allow!) and that the protagonist, while mostly possessed of laudable motives, and a caring heart, is not all sweetness and light, and prone to some of the less attractive elements of human nature.
Yes, I walked out of this musical at the end, which finishes up in the most magical way possible (I shall not spoil it by saying  exactly how but it is clever) feeling buoyed by the undeniably joyful climax, and I daresay I won’t stop humming the songs for weeks, but it was made all the more impressive by the fact that some darkness was allowed to spill over into the light. That’s why this will be remembered as the one of the musicals I have profoundly enjoyed rather than simply being another blip on an endless conveyor belt of musical pop culture moments.
It only has 11 days to go in Sydney before moving on to Brisbane, but it is absolutely worth seeing if you get a chance. This is how a musical should be done. 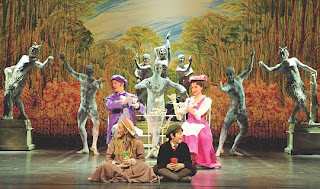