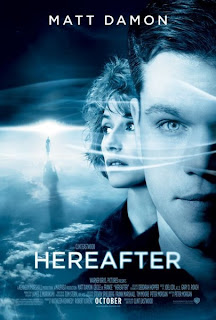 This is an intense movie…. but also a curiously un-involving one.
The first part is to be expected given it’s subject matter of death and the after life, and for the most part the movie succeeds in not letting the emotionally heavy subject matter drag it’s narrative into a melancholic mire. Which is quite an achievement given that it starts with a horrifyingly real recreation of the 2004 tsunami, in which the character of Marie Lelay is swept away to an almost certain death, during which she sees into the realm of the hereafter with profound effects on her life.
It then moves after this emotionally jarring start to Marcus, a London school boy who suffers a traumatic loss and withdraws into himself, desperate for answers….. and finally there’s Matt Damon’s character, George Lonegan, a psychic who actually does speak to the dead, unlike the charlatans featured elsewhere in the movie, but struggles with his gift, which he feels is a gift that robs of the chance to a real life.
With all that emotional heaviness suffusing the film, which has only a few lighter moments to leaven the weight of the subject being discussed, does sometimes feel a long, sad stroll through emotional neighbourhoods you would much rather avoid. It is, at times, hard to really get involved in the lives of the characters, and you feel a certain remoteness from them despite the writer’s & director Clint Eastwood’s obvious intention to draw you in deeply and completely. Even so, despite that, and the somewhat cheesy, too neat ending, I ddi find myself engaged with the movie for the most part, locked into it’s world, and forgetting for once at the Open Air Cinema (hard with the stellar Sydney views before me) where I was.
This is a film to make you think about a subject that most of us work very hard to avoid.
* Viewed 9 February 2011 with Steve, friends, Warren, and Sue.