Well, now I do. Hated them at high school when the only ones I saw were weird, odd, or badly put together. But modern French movies have struck a chord with me, and from the delights of Amelie, to the darker story of The Hedgehog, I love the sense of whimsy, fun, or oddness that imbues many of these movies, with a sentimentality that in an American movie would be thick as treacle in it’s corniness, but in these movies carries with it a real sense of what it means to be human, with real people leading real lives. 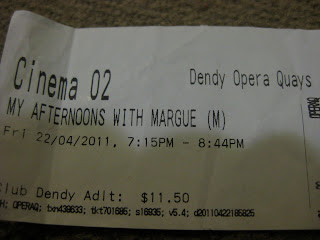 Yes it is quaint and cute, and the ending lifted straight from a modern fairytale, but it is also grounded in the darker realities of life where people are treated cruelly by those who should love them – Gerard Depardieu’s Germain’s mother is played with neglectful menace by Claire Maurier – aren’t given the chances in life they should have been given, and are dealt unfair blows by the simple process of ageing (the delightful Gisele Casadesus imbues Margueritte, who in many ways saves Germain, with a sweet intelligence, coloured by a sad recognition that life is taking much of what she values from her). The relationship that forms between Germain, and Margueritte is real, and affectionate, and ends up giving each of them as much as they give away to establish and grow it. It could have been saccharine overload but it isn’t because these two fine French actors, ground their characters in lives that make sense and could happen.

Oh and about the happy ending? By the time you reach it, it seems perfectly fine to end the way it does, so powerfully have the two actors brought their journey together to life.