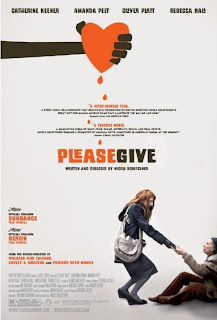 This was the first of my Open Air Cinema movies for the year – the Open Air Cinema is, as it’s name suggests, a cinema in the great outdoors; well not so much the great outdoors as it is Mrs Macquarie’s Chair in Sydney’s Botanic Gardens but it doesn’t have a roof, and there are times when you watch movies in pouring rain (not an issue if the movie is good) – and it was excellent. Not buy it on DVD excellent, since it left me feeling a little depressed by its portrayal of the struggles of day to day life – that likely has more to do with my struggles at the moment to redefine my career particularly,which actually underlines how good a job it did of conveying modern life, warts and all – but extremely good nonetheless.

Catherine Keener is an absolute stand out as the central character, a wife, mum and business woman trying to do it all while struggling with ethical and moral dilemmas and the needling sense that there must be more to life that what is has in her hands at that point. Her nuanced performance is suffused with an every person nagging sense that she may not be the doing the best she can, and she tries, via hand outs to the city’s poor, and her on again, off again quest to volunteer, to make her life much more meaningful than it is, with less than stellar results. But that’s not because she has failed in any way – by any yard stick she is a success – lovely husband, family, chic apartment, successful business (which provides one of the central moral dilemmas of the film as she struggles with making money by re-selling for inflated amounts, the retro furniture of old people) – but because she is trying too hard to make life bigger than it is, instead of fully inhabiting the life she has now.

But that’s not a criticism as I can identify with her need to infuse the banal every day with depth, meaning and purpose, as I reach for big ticket items like a stellar career as a writer (should that ever happen) when what I should be doing is living my life, infusing it here and there with small, new, meaningful things, rather than waiting for the big imagination -capturing things that may never happen. By all means dream big, because that fuels the human soul, as does the hope for great positive change, but in the mean time, work hard to make the life you do have one that satisfies the soul too. I think in some small way Catherne Keener’s character, through her interactions with the other members of the ensemble cast – all of whom bring their characters to life brilliantly, using a wonderfully insightful script – finds some small sense of peace by the end of the movie, but in keeping with the movie’s very firm sense of day to day grinding reality, never finds true resolution as no one ever really does in life, which is by its nature, evolving, unfinished and messy.

This movie communicates so well because it speaks to a sense of flawed, struggling humanity central to us all, and for that reason alone, it is worth seeing.