I am not a fan of slasher flicks generally.

It’s not the fear of what might happen next that truly bothers me, although I appreciate that is largely what draws most people to them. No, the reason I avoid them like a, um, serial killer, is that the thought of all those people losing their lives is horrific, and sad, and not something I want to spend two hours witnessing.

But eleven years after watching all three Scream movies with my then house mate, Andrew, and getting absolutely smashed on Sangria – it is not cordial, people, trust me – I went along to see the fourth instalment when my current house mate couldn’t find anyone, including his boyfriend, to go with him. Surprisingly I enjoyed it! I’d forgotten that the original movies, while maintaining a high body count, also contained a great deal of humour, and post modern posturing, and some fun, witty dialogue, and this movie, had all that and more.

Yes there was lots of blood and gore, but the script writers went to a lot of trouble to flash out the characters as best they could in what is, naturally, a fairly restrictive genre format, and fashion some sort of storyline, which was peppered with all sorts of wry observations of modern life, no more hilariously, and to deadly effect, that at the end, when the person who made everyone think they were innocent, ends up being anything but, is still being lauded as a hero even as the heros of the story dust themselves off after nearly dying. It is a clever dissection of the way modrn media doesn’t stop to check what is right and what isn’t, and simply runs with initial impressions or information to disasterous or ruinous effect.

Yep, this slasher flick, replete with many bon mots and witticisms, manage to actually say something even as rivers of blood flow through it. Well done! 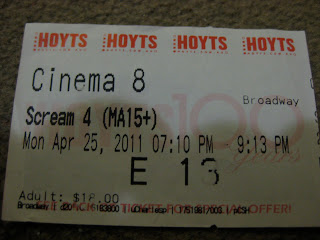