I loved this movie!

It promised a return to feel good 1970s family movies with a 21st Century knowing postmodern edge and it didn’t fail to deliver. Media wunderkind, JJ Abrams of LOST and Alias fame, continues to show that spending his childhood in the 70s making Super 8 movies (much like his hero, and now collaborator, Steven Spielberg) was time well spent. His eye for detail, a great story, emotions that spring from genuine interaction between his characters (rather than being manipulated out of you like a mallet flattening steaks for a BBQ, which is all most Hollywood movies can manage these days), and a sense that even when awful danger threatens, that you are going to be safe.

Oddly enough that last facet doesn’t take away from the rollercoaster ride of thrills that this movie delights in taking you on, but rather reinforces the sense that you can truly surrender to the events as they happen. Maybe it is like reading the end of the book, and thus being reassured that all will be well come what may, but I prefer to think of it as being safe in a sense of time and place, and knowing that no matter how dark the night, there is a morning coming and somehow it wil be bright and shiny. It harkens back to 1970s innocence, if such a thing ever existed (it did for this Baptist pastor’s son growing up in a loving church family), but updates it all beautifully at the same time without surrendering one ounce of charm or fun. 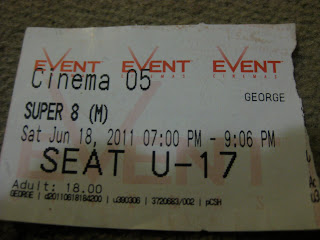 I wanted to love this movie.

But I did not. I walked in, fatally as it turns out, expecting the movie to be every bit as funny as the hype, both commercial and from friends who had seen it, a not unrealistic expectation given that Kristen Wiig is one uber talented funny lady, as is the rest of the cast, but alas it wasn’t.

Oh, it had very funny, very silly moments that descended into the sort of hold-your-sides-laugh-out-loud farce that you get so seldom in movies these days, unless someone British is involved, and I don’t think I will ever forget watching Maya Rudolph’s character sitting in  the gutter evacuating her bowels (yeah it doesn’t sound funny like that!) with her wedding dress folded around her. Somehow the juvenile nature of the humour managed to transcend its puerile gross out base, and I laughed long and loud. But the farcical moments came and went, didn’t lead to ever more silly farcical moments, supplanting them instead with serious characters moments. .

Now there’s nothing wrong with injecting some serious elements into a comedy and it can often work well, rounding out the characters and adding some depth to very silly goings on. But in this instance, it merely resulted in a movie that didn’t really know what it was, or where it was going – was it a gross out comedy? A romantic comedy? A buddy chick flick? I don’t think the writers could decided, and it ended up resulting in a movie with a severe case of Multi Genre Disorder, which left me feeling quite unsatisfied. It’s a real pity since so much of the movie showed real promise and it could have been so much more.

As for everyone else. I have no idea what you were laughing at for so long…. 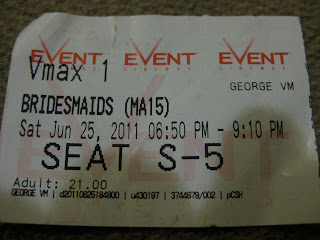