In my general day to day life blog, I posed the question of whether you can go back and truly enjoy movie or TV shows from your past, and by past, I mean, dim, dark childhood past?

Some shows such as Charlie’s Angels or Hart To Hart, while revealed for the frothy confections they always were, still manage to amuse and delight; others such as Lost In Space simply look ridiculously threadbare and you wonder what on earth you ever saw in them, and some, such as Tron, were watched once, and then never re-visited (it came over out in the pre video age and I hadn’t bothered to track it down on DVD) but retain a fond spot in your heart. Obviously it sits in the third camp at the moment, and while I do plan to watch it as soon as I can get my hands on a copy ofn the movie (at which point it will move into category 1 or 2; I am hoping for the former), I sat down to watch it’s much delayed sequel (Tron Legacy – saw @ Hoyts Broadway on 9 January 2011) with only a hazy recollection of it’s predecessor, something that worried me as I wondered how easily I would re-enter the world of Tron. 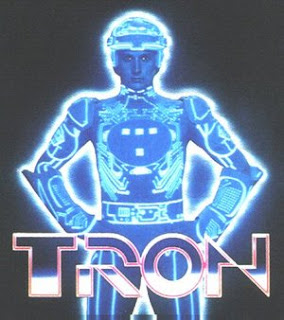 I have no idea why I let the angst in. The movie does a superb job of linking itself to the first Tron, with a minimum of expositional clunkiness, and it’s obvious that the creators of this incarnation have gone to great lengths to retain the look of the original film while still utilising the latest technology.

The new movie is visually lush and portrays  a fully realized virtual world that you immerse yourself in fully from the word go (well as soon as the movie enters The Grid, the name given to this virtual world, which has been a tyranny of perfect oppression since the last movie), and while no one would accuse the Tron Legacy of possessing a complex narrative, the story it does tell is well fleshed out for the most part (some elements of the story are rushed or seemingly thrown in at the last moment such as Tron’s belated change from bad guy to good guy) and illustrates well why the ceaseless quest for perfection as exercised by so many tyrants, is an illusory goal.

It carries you along for two hours in a rush of richly burnished graphics, fast moving storyline, and some genuinely heartfelt moments ( the end of the movie where Cora sees a sunrise for the first time, all realised with no dialogue at all, is beautiful and brings a smile to the face), and as far as my faulty memory is concerned, adds much that is good to the Tron universe. 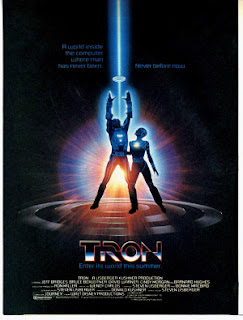 So can you back? Not always but as Tron Legacy displays beautifully, you can most definitely go fast as light ( on a light cycle if you can!) into the future, and enjoy the ride all the way…