Skip to content
What a wonderful movie.
I have often had a difficult time with Coen Brothers movies – enjoying how articulate and clever they are, and enjoying immensely the great subtle (or not so subtle) wit they bring to their creations but also finding their odd take on things a little too odd at times – but this movie resonated with a depth of emotion that rang real and true, and impacted you quite powerfully.
At its heart, True Grit (@ Dendy Newtown, Saturday 5 February with my boyfriend and friend Fahmi) is the story of a 14 year old girl, Mattie Ross, who, imbued with a simultaneous naivety about life even as she takes on adults many times her age and usually wins through sheer force of will, determines to track down and capture her father’s killer, Tom Chaney with the aid of a very unorthodox US Marshall, Reuben “Rooster” Cogburn, played superbly by Jeff Bridges, who is given very little in whether he participates or not. The unusual duo are joined by Texas ranger La Boeuf, who provides some of the comic relief, on their trek into the Indian Lands where they encounter numerous obstacles in their hunt for Chaney.
The touching aspect of this movie for me was watching Mattie grow from an over confident child who, despite her pluck and vigour is as easily scared or bewildered as any one her age would be, to a somewhat scarred young woman who realises that sheer determination and belief is not enough to win the day. Her optimism at the start of the movie is inspiring but you soon realise just how out of depth in the gritty arena of life she is, and how far she has to travel both literally and figuratively. The movie is less about her quest for vengeance in the end, which she discovers is neither as easy or satisfying as she had assumed it is, than her growth as a person and the way this impacts Rooster and La Boeuf, who despite themselves form an attachment to her, a bond that is crucial to her survival. 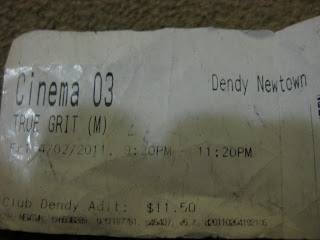 It is somewhat sad watching her coming back as a 39 year old to find Rooster Cogburn, reduced to pretending to be a man of the Wild West in a travelling show, but also touching seeing that this event in her life had made so much more of an impact on her in ways she hadn’t expected, than she realised it would when she first bravely, and foolishly you might argue, rode across the river to avenge her father’s death.
If you want a movie with heart, and depth, and an articulation of the human condition in a way that is heart warming without being mawkish this is the one.