I need to make it clear from the start that I :


(a) Love and adore this band more than I can say.


When I first saw the clip for Yellow years ago (in 2000, to be exact) on a 1/2 hour CNN world music round up show when Coldplay had just won their first Mercury Prize, I was besotted immediately. I scoured every last record store I could find for a copy of Parachutes, finally locating one in of all places David Jones Miranda (no one was more surprised than me, frankly), and I listened to it obsessively, my initial attraction turning into deep, enduring love. My fervour for the band has not dimmed one bit in the intervening time.


(b) They are one of the few bands that manages to consistently turn out great music that is inspired, soulful and just plain beautiful (although X & Y tested my faith a little in that regard, being a tad too bombastic at times after the sublimely clever, Rush of Blood…), all underpinned by a solid commitment to values that matter like Fair Trade, which they take every opportunity to espouse… 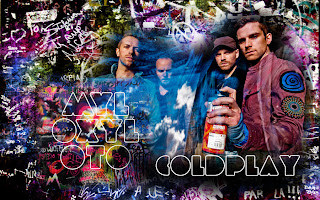 So with all that in mind, please understand where I am coming from when I say I am not at all excited by Mylo Xyloto. Its not that its a bad album – far from it, and there are many bands that would kill for it to be part of their discography. Its simply that while some of the songs are excellent – Paradise has grown on me, I quite like Rihanna and Chris Martin’s collaboration, Princess of China, and Major Minus is catchy in that insistent way that makes you want to listen to it again and again.


And therein lies the problem with this album for me. None of the songs really compel me to rush back to listen again and again till my ears bleed with joy (it happens), and my ear worm explodes from choosing which song to mercilessly replay over and over in the grooves of my brain (especially when swimming and iTunes is not available). I do like it, but I don’t love it, and that’s disappointing.


Having said all that, I will be as front and centre as I can manage come their next tour through Australia, I will continue to support Chris and the gang as wholeheartedly as I ever have, and I will even advise people to buy Mylo Xyloto if they want a great album to wash away the sonic stains from music made by lesser mortals.


I just won’t be humming any of the tunes quite as often as I would like to.