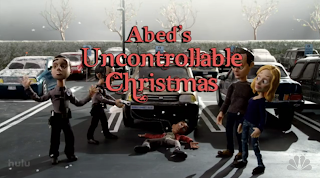 Christmas is, on the surface at least, the shiniest and happiest of festivals – happy families exchanging presents, lavish feasts, joy and goodwill, everyone happy ever after lit by the glow of a 1000 warmed hearts. But as Abed, who is my favourite character in this creatively rich series, discovers in this most unorthodox of Christmas tales, it isn’t simple at all.

It used to be for him. While he is the child of divorced parents, with a Muslim dad and a Polish Christian mum, which you think would complicate things to an impossible degree, his celebration of the season was simple. Every December 9, he would watch the stop-motion Rudolph the Reindeer special with his mother. He didn’t care about decorating or giving presents or any of the million and one things that symbolise the festive season – all that mattered was that he spent time with his mother. 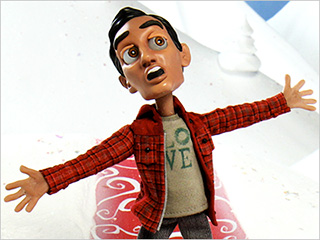 To everyone’s surprise, most especially Pierce’s (who remarks in trademark politically incorrect fashion – “I thought your people spent the season writing angry letters to the newspapers”) Abed loves Christmas. He knows implicitly what Christmas means to him. So it makes sense that the study group is alarmed when Abed not only admits that he has lost any sense of the meaning of Christmas but that he needs to go on some sort of quest to divine what it really means.
Then he announces, almost as an aside, that everyone is appearing to him as stop-motion figures (and that since they’re animated that they really should act, well, more animated). Since Abed is the most imaginatively fecund of the group, and often uses his creative skills to interpret weighty issues in life, everyone initially laughs it off. But when it becomes clear that this isn’t another of Abed’s flights of fantasy, but that he truly believes they are all animated, everyone becomes concerned and professional therapeutic help is sought. 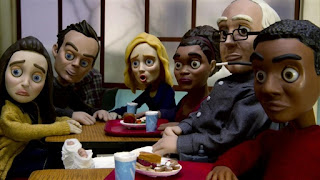 But naturally being Greendale college, the best anyone can come up with is psychology professor, Ian Duncan, who rather ham-fistedly tries ‘fix’ Abed by proposing extensive therapy sessions which Abed sensibly rejects. But he is tricked into attending a group therapy session in the library study room, and reluctantly agrees to undergo “Christmas-nosis” which will take him to the Christmas-themed Planet Abed. 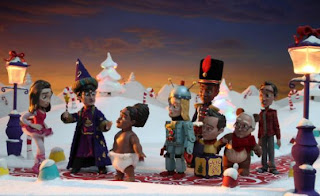 It’s here that the fun, and eventually thinly-disguised heartache, begins as Abed sets out for the North Pole, with the group all transformed into Christmas toys that represent not necessarily flattering facets of their character, determined to recover his misplaced meaning of Christmas. Along the way the friends drop off one by one –  Shirley is ejected from the group by a Christmas pterodactyl, Jeff is consumed by Humbugs that swarm over and consume him – until he reaches his goal and opens a box purporting to contain the true meaning of Christmas. What the box contains is the first season of Lost on DVD which Abed cheekily says represents “lack of payoff” and it’s only after his friends stand up for him against Professor Duncan that Abed snaps to and realises that Christmas has meaning after all. 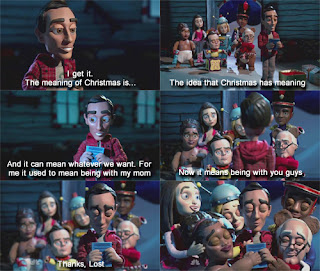 What was so wonderful about this episode, which must become a Christmas classic if there is any justice in the world, is that it deftly balances Abed’s great pain with the wit and levity this amazingly creative series displays in spades every episode. The visual style was yet another creative leap right out of the box, and the abundant pop culture references, and insertion of Christmas pterodactyls and the like had me laughing like a fool even as I felt for Abed in his moment of great loss.

It is a beautifully rendered snapshot of what happens when one person pushes aside all the warm and fuzzy trappings of the season and dares to ask where the meaning is in all of this. The fact that he finds an answer of sorts is heartwarming, and the journey to get that to that moment of realisation is inventive, clever and punctuated with more sight gags and pop culture references that I can adequately describe, but the episode is at heart very much about Abed daring to say that the Christmas emperor has no clothes. It is as powerful and touching as it is wildly creative and funny, and succeeds in keeping them all in perfect balance all the way through, which is a rare feat, ultimately creating an episode that inspires as much as it entertains.