It is no secret that I love Christmas (unless you have been living under a rock in a small village on the windswept edges of Mongolia in which case you are (a) very odd, and yet quirky, and (b) forgiven for missing that) and naturally being a pop culture junkie, I seek out every TV show and piece of music that feeds this festive obsession.

I know many TV shows are derided for featuring twee and corny Christmas episodes (mostly by elves on internet forums with massive chips on their very small, effeminate shoulders), but many of them actually come up with some of their most creative, clever and funny shows of their season, since they are given the freedom to do pretty much what they want.

So here are the Christmas episodes of my some of my favourite shows (which naturally will be shown in Australia sometime around May next year, with no regard for their sparkling seasonal content): 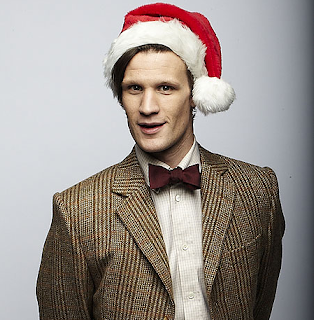 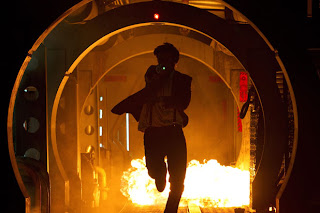 The Dr Who Christmas episode is a staple of British TV and it sounds like this episode is going to be right up there with the best of them. With a more than passing nod to C. S Lewis’s The Lion, The Witch and The Wardrobe, the story takes place during the dark days of World War 2 when a war wear woman, Madge Arwell, flees the death and destruction  of The Blitz in London with her two children to a house in Dorset. There, the Doctor, who she mysteriously met two years before, is waiting for her, and sensing they need some magic in their lives, takes them on a fantastical journey through, yes you guessed it, a wardrobe in one of the rooms.
It promises to be every bit as magical as the other six episodes have been, and I can only hope the ABC here in Australia is able to do as they have done in previous years,and beam the episode into our homes in time for us to see this on or near Christmas Day. Fingers crossed!
Here’s an fun promo clip by Matt Smith to get you in the mood.

A prequel was released online on December 6 for the episode and it shows the doctor holding a red button in a space ship desperately calling for Amy Pond to come in the TARDIS and save him. He recalls though that Amy isn’t going to be able to help him as she is long gone. So he releases the button, and the ship explodes moments after he wishes Amy a Merry Christmas. It’s actually quite touching and bittersweet, and bodes well for the full episode to come. 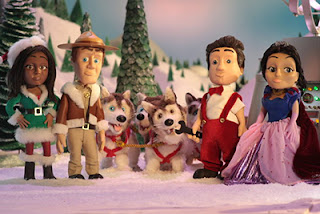 To my great and enduring delight, Eureka has crafted what looks to be another standout Cristmas episode. The entire episode has been rendered in a number of different animation styles, packed full of the trademark wit and idiosyncrasy that has made this show so beloved by so many (although not enough for syfy, the channel it appears on, who declined to keep it on the air.)
So how do these usually flesh and blood characters end up as claymation figures, CGI and even South Park-esque doppelgängers? It’s all thanks to a super photon generator which as we all know can’t just be left lying around the house, and it takes all the wit and ingenuity of Sheriff Carter (Colin Ferguson – check him out talking about the episode here) and the Eureka gang to fix the mess this device generates.
What’s most impressive is that the producers of this fine series decided to go right outside the creative box, and explode out of the other side of the envelope (yep mixed metaphors – got that – thank you) with colour, fun and a great story to boot! But I’d expect nothing less from such creative minds who have granted fans of great writing, characterisation, and style the best show to come along in years.
This preview looks wonderful, and I can’t wait to watch it.
You can watch the Eureka team talk about the episode at Comic con in July 2011.
Also SciFi vision wrote a fun rundown of the show too. 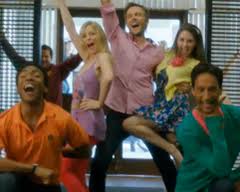 Community, beloved for it’s off the wall characters, and even quirkier plots, is going all Glee this Christmas!
When Greendale’s very own Glee isn’t available to perform at short notice, tour favourite group of study buddies, and unlikely friends are seconded to fill in for them, driven to perfection by the college’s very own Mr Shue-like glee club director, who’s possibly a few notes short of symphony in the sanity department, played by Saturday Night Live’s, Taran Killam. All the songs are supposed to be originals and I can’t imagine this not being poptacular!
Here Joel McHale (Jeff) talks about the episode:
Oh, and in news to thrill the heart of any fan of this greatly underrated comedy which has to be the funniest, wittiest sitcom on TV at the moment, Community was voted the Fan Favourite by TV Guide readers and made the covers…yes three different ones! It’s brilliant publicity for a show that deserves to be a lot of love, and be watched by millions more than it is! 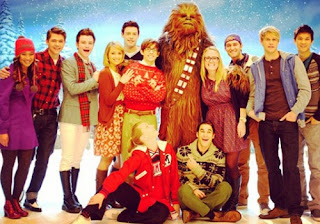 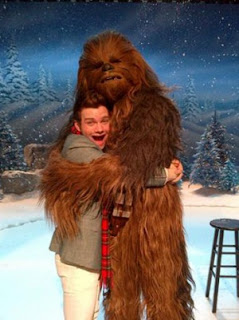 This year Glee wanted to invoke old-time 70s Christmas TV specials (the fact this time period is now considered ‘old-time’ disturbs in ways I can’t even articulate adequately) by having the New Directions gang appear on a TV special within the episode. It will evoke the Star Wars and Judy Garland holiday specials which explains, at least, why Chris Golfer (who plays Kurt) is hugging the most famnous Wookie of all.

The episode, which will feature about 6 holiday songs, has scenes showing Kurt and Blaine exchanging gifts in the hallway (what looks like jewellery – what could it be?!), Sue helping out a homeless shelter showing she’s not a total grinch, and Rachel and Finn in the front of the lockers possibly giving gifts. Whatever happens the choir room is full of tinsel and a massive beautifully decorated tree and everything seems set for an “Extraordinary Merry Christmas” indeed!

Matthew Morrison, who directed the episode speaks on Jimmy Kimmel Live about directing his costars, which had some funny moments:

Here’s an interview with some of the cast on the special: 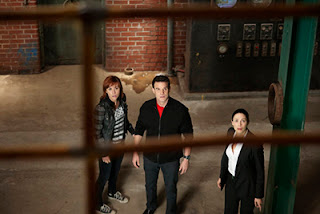 This looks, from the trailer, to be one of the classic ‘something-inexplicably-weird-has-happened-and we-have-to-sort it out-really-quickly episodes with a seasonal twist. The basic story pivots around Eddie McClintock’s Pete Latimer being hit on a head by an artifact while stacking them out in the titular warehouse, and waking up to find himself in an alternate reality where he doesn’t work at the warehouse, and McPherson, a very dead bad guy, and ex-Warehouse 13 agent, is very much alive. The episode also involves the usual cast, who all must be convinced in one way or another that they are living the completely wrong lives. As usual there’s lot of laughs to go along with the drama, and this has all the appearances of a great addition to the Warehouse 13 canon.

Here’s a preview of the show by SciFi Vision.