So I finally got to see a few of the episodes I previewed earlier and they are such a delight. Here’s my reviews of Eureka’s Do You See What I See

DO YOU SEE WHAT I SEE – EUREKA

Ah I do love the twisting of standard Christmas phrases into titles that work so well for a Christmas episode. In this case it’s perfectly suited to an episode where what the characters isn’t really what they are seeing at all. What we see though is a delightful flight of animated imagination with almost every style of classical animation used, telling a story that will become a Christmas classic if there is any justice in the pop culture universe. 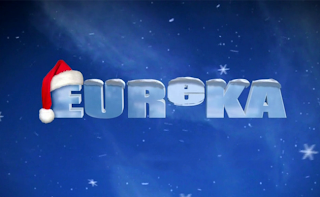 So what happens to the beloved people of Eureka that so upends their festive world? The episode takes place on Christmas eve, where we initially see Allison (Salli-Richardson-Whitfield) and Jack (Colin Ferguson) appear to be living together with Zoe (Jordan Hinson), Kevin (now mysteriously non-autistic – you have to love alternate timelines don’t you?) and little Jenna, and in the full throes of an amazingly over-the-top Christmas. S.A.R.A.H. , Jack’s talking house (who narrates the episode at the top and the tail of the story) is beautifully decorated – multi-coloured animated snow flakes on the walls, a Christmas tree so sumptuous it could only happen on TV and even chestnuts recently roasted on an open fire. It is a perfect Christmas although Allison is so focused on creating her vision of Christmas that she is forgetting the people around her.

Naturally some of the gifts for Jenna require sophisticated technology and while Allison is out getting those, and Jack is seeing to a Christmas surprise he has cooked up with Henry (Joe Morton), and Vincent (Chris Gauthier), owner of Cafe Diem, the Super Photon Generator, meant to create snow for a Winter Wonderland, malfunctions and everyone is transformed into cartoons.

Well, not quite. It’s explained that the photon waves generated by the machine Jack calls a “proton generator” (I love the way he is allowed to mangle scientific names and concepts without the writers once making him look stupid – it’s quite an art and they pull it off beautifully) have simply altered everyone’s perceptions of what’s real so they’re seeing cartoons. Still, whatever’s happened, many cartoon conventions are lovingly observed such as the slapstick sound effects, talking inanimate objects – Jim Parsons of Big Bang Theory fame, is hilarious as Jack’s Jeep, who we find out is called Carl, and is greatly resentful of Jack just using him and not being appreciative – and laws of physics that are bent with few ill-effects on the characters (think Road Runner and Wile E Coyote). 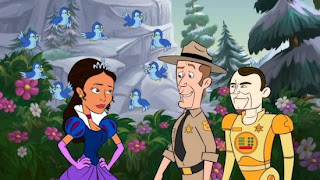 The episode also uses many and varied animation styles – from traditional cell animation to claymation and classic anime style, all of which are used to great effect in telling the story. There is even one sequence where Jo, Jack and Andy cycle through appearing as Peanuts, then Simpsons, then South Park, and finally Scooby Doo versions of themselves. Not only is it a priceless laugh-out-loud sight gag but it pays homage to many of the classics of the genre.

Of course with so many styles being used, one of the joys of the episode is watching how various people are rendered – Jacks ends up at one point in a Dudley Do Right cap (much to his surprise, in an episode packed full of surprises) while Jo Lupo (Erica Cerra) is “Jo White” complete with a retinue of bluebirds (who draw out a softer side of our tough security operative), and Henry has a pull-string which he needs to keep pulling to keep talking and moving(Farho thinks this is to give him a chance to pause and think). Everyone is thrown at one point or another by the way they look, and theorise on why they are seeing themselves as they are. Fargo (Neil Grayston) is particularly appalled by his bobble-head appearance, and begans an earnest conversation, and bout of soul-searching with Henry, at least until another photon wave hits them and he becomes an anime warrior who defeats the Sninja.

A what you say? Well that’s another of the joys of the episode. Unknown to everyone who’s racing to turn off the photon generator and restore a fully three dimensional world, the events of the episode are being unwittingly controlled by Zoe, Kevin and Jenna who have opened an adventure Holobook from which pretty much anything can be created. They eventually realise what they’re doing but not before hilarious sequences where Jack and Andy (Ty Olsson), and later Henry and Fargo, have to battle the menacing snow ninjas.

But underpinning all the impressive special effects, envelope-pushing imagination, and hilarity, is a substantial story that gives the episode its heart and soul. Their changed circumstances afford the various characters a moment or two of introspection since they are not their normal selves, and heart-to-heart conversations between Dr Drummer (clearly Santa Claus but no one says this out loud) and Allison, Jo and Taggart, and Andy and yes, one of Dr Drummer’s huskies (it’s an animated episode after all people) lead to revelations for Jo, Andy and Allison, all of which are believable and make perfect sense. It’s beautifully woven into the storyline and adds immeasurably to an already rich, perfectly realise episode, which is why I suspect, with all that going on, that it will become an episode that lives on far into the future.

It was an utter delight and joy to watch, and as I alluded to before, it has all the makings of a classic Christmas episode that ticks all the warm and fuzzy boxes, and will entertain regardless of how much familiarity you have with the idiosyncratic magical world of Eureka.