Once Upon a Time is, quite simply, brilliant.

I had high hopes for this show which seemed to promise LOST-like intrigue with a postmodern take on fairytales, and it has delivered in spades. It bounces back and forth between the fairy tale characters as we know and love them, and the present where these same characters, among them Snow White (Ginnifer Goodwin), Prince Charming (Josh Dallas) and a suitably creepy Rumpelstiltskin (Robert Carlyle) are effectively imprisoned in the modern day town of Storybrooke, Maine. They have been cursed to live in a world without happy endings by the evil queen (Lana Parilla) who is also caught up in the all-consuming spell, unaware of who they really are.

The only person who can free them from this amnesia-powered curse is Snow White and Prince Charming’s daughter, Emma, (Jennifer Morrison) who was saved from the same fate as everyone else by being placed in an enchanted wardrobe mere moments before the evil queen’s spell took effect, destined to free everyone on her 28th birthday. The catch (and of course there has to be one)? She is no noble warrior, valiantly riding in to save those she loves. For a start, she doesn’t know anyone in the town, even her mum and dad, who naturally don’t know her either, and though the person trying to convince her she is indeed the saviour of all of fairytale-dom (the son she gave up 10 years earlier – Jared Gilmore who, rather cleverly has been adopted by the evil queen, now mayor of the town) argues intensely and with passion that she is who he claims, she remains convinced it is all hokum. 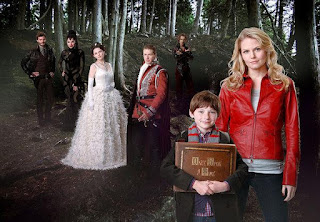 But little bit by little bit in ways I won’t reveal, she begins to suspect that there may something to the ‘delusions’ of her long lost son, and the series begins to get more and more involving, especially as you have each character in the town contrasted with their backstory, using a very LOST-like mechanism. It shows great promise, and if they can hold to the strong characterisations, post modern synthesis of fairytales and the modern day (a great contrast if ever there was one), and the attendant exploration of what a fight between good and evil really looks like (and is it as black and white as it first appears), it will go from Must See to Absolutely Cannot Ever Miss A Single Episode On Pain of Death.

Yep, it’s that clever, and visually arresting too with the town’s often dour visage contrasting nicely with the brightness and colour of the fairytale flashbacks. I can’t wait to see what they do with it next.