This is instantly recognisable to anyone over 35 as the less than subtle catchphrase of Mr Humphries, the flamboyant menswear salesman from the 1970s British sitcom, “Are You Being Served?”(1972-1985). Though he was never explicitly identified as a gay man, it was clear from his mannerisms and innuendo-laden dialogue that he was, in fact, a friend of Dorothy. The writers clearly believed that the best way to identify him as a gay man without coming out (no pun intended) and saying so, was to trade on the obvious gay cliches. While there wasn’t anything deeply offensive about it since British TV of the time used cliches for every group in society as their stock in trade for cheap laughs, it was reflective of peoples’ perceptions that all gay men were like this. 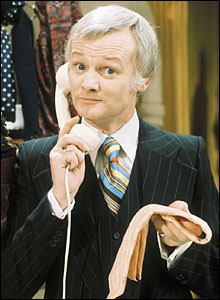 Of course a great number of people still think all gay men are like this, and that’s largely because the media, stuck in weird 1970s creative time loop they seem loathe to escape, perpetuates this idea. Naturally there are gay men who fit the cliche like a tight piece of spandex, and since it’s who they authentically are, they should be represented and be seen for the fabulously flamboyant characters they are. But it’s not who all gay men are, and finally TV is cottoning on to that fact and showing the full spectrum of gay types.
Shows as diverse as “Will and Grace”, “Mad About You”, “ER”, “In Treatment”, “Weeds”, and “Buffy the Vampire Slayer” have all included, or currently include gay characters who are as complicated and well drawn as their straight counterparts, which of course, they are. It is refreshing to have gay characters in shows now that are not simply cartoonish stereotypes that do little but provide easy laughs with precious little sense given of who the person is. It is encouraging too that many of these characters are integral to the shows they are a part of, and not simply an amusing, or perplexing oddity popping in now and then when it suits the writers. Their lives are treated as no different to any other characters, and it is good, as a gay man, to see myself mirrored on the shows I like to watch (by actors who are far better looking than I’ll ever be!) 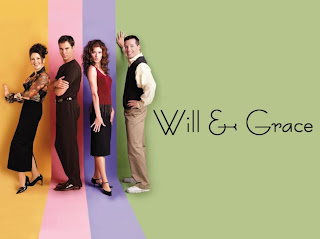 This trend, which began in earnest in the 1990s when “Will and Grace” was help up as the standard bearer for its (mostly) realistic portrayal of two gay men, and their close female friends, has gathered pace spectacularly in the Noughties with many shows now so routinely including gay characters that it is barely remarked upon now by media commentators.
You get an idea of how far we’ve come when you read a recent feature on Advocate.com (a gay media site that covers everything from media to societal trends to hard hitting issues) that asked its readers who their favourite gay characters are. The response showed beautifully that not only are we spoilt for choice when casting our eyes around for positive (and not so positive) gay representation in TV but that so many of these shows are incorporating their characters so fully into the world they create. People will only love a character when they make sense, and most characters only make sense when they emerge from the stereotype closet, and are allowed to be a complete part of the world they inhabit. Clearly as this poll shows there is a lot to love!

Read the full article here
We should be excited by the maturity with which gay characters are now shown and I can’t wait to see what the creative types in TV get to do next!