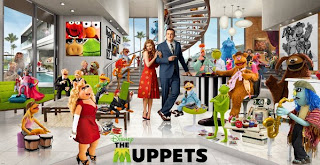 I have had Muppet voices talking in my head for over 24 hours and I couldn’t be more delighted. After much too much time apart, I have spent quality time with the delightful icons of my childhood, and it was, without exception, every bit as good as I remember it.

I was a little worried, I’ll be honest. While there is no doubting the dedication of Jason Segel (How I Met Your Mother, Forgetting Sarah Marshall), one of the producers of the movie, and lifelong fanatical Muppets fan, to bringing the Muppets back front and centre into the zeitgeist, I wasn’t sure if it would be like old times. Sure, the reviews had been good, no great, so that inspired a great deal of confidence. But I had tried to go back so many times to re-visit cultural touchstones of my youth, to mixed results. I really wanted this to be one of those reunions I would place in the “It’s Good to Be Back” file.

Thankfully it was, and a whole lot more. Jason (who plays Gary in the movie) and his fellow producers have captured the sweetness and plain silly humour of The Muppets to dazzling effect. It was like meeting an old friend, and finding out that while they have largely stayed much the same, they have also updated in small and culturally relevant ways without sacrificing an iota of who they essentially are (Animal is a perfect example; he’s still Animal but undergoing that most modern of rituals – self help).

The movie is a joy. The opening musical number alone, “Life’s a Happy Song”, is worth the price of admission. It celebrates the joy of having someone special by your side to go through life with, and features some inspired moments of hilarity such as when Gary and his brother Walter (a Muppet, although no one really come out and says that till near the end) try to rhyme the next lyric with “fishes”, or when Gary, Walter, and Gary’s girlfriend, Mary (Amy Adams) get on the bus to Los Angeles, and the towns people, who have danced up a storm in the centre of town collapse from exhaustion and say “Thank goodness they’re gone!” (or words to that effect). 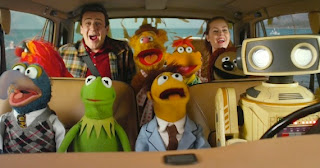 From that point on, the movie, which centres on Walter’s attempts to get his idols, The Muppets, back together again for one last show to save their now decrepit theatre from an evil oil baron, Tex Richman (Chris Cooper), leaps gleefully from a funny or touching song to hilarious sight gag (Kermit’s first appearanceto laughter-inducing fourth wall jokes (where The Muppets acknowledge they are in a movie) such as “travelling by map” (which is faster than normal travel) or the suggestion being made, and naturally taken quite seriously, that it would speed up the regrouping of the rest of the gang if they did by montage rather than rounding up everyone one by one.

Granted the humour isn’t postmodern hip and clever, but frankly, if it had been, I would’ve been disappointed. That type of humour, if cleverly written, works wonder for Shrek and Despicable Me. But this movie works because it doesn’t attempt to needlessly update The Muppets to make them “relevant”, and focuses instead of showcasing why Jim Henson’s creations were so popular in the first place. They are sweet and likeable sure, but they are just a little crazy in the best possible way, and even dare I say a bit subversive. They aren’t like everything that’s around right now and that’s just the point.

Of course you can’t escape that they have slipped into a cultural irrelevancy of sorts with the younger generation. While anyone over 30 will remember them with fondness, the younger generation, if we’re honest, has little affinity for them. But that’s where the movie succeeds too. It acknowledges this decline in zeitgeist relevancy, plays on it beautifully as The Muppets have all scattered to the four winds, forced into seedy obscurity by a world that’s left them behind.

But it doesn’t then confront it by wilfully changing who The Muppets are, or making them the object of some sort of knowing post modern spoof. It simply lets The Muppets be themselves, and a world sorely in need of their whimsical humour embraces them wholeheartedly as the movie’s finale gloriously celebrates.

Yes folks, the gang is back together, they are still very much loved, and this movie is testament to the fact that classic characters never truly die. Especially, if you’re The Muppets. All you need is a wacka wacka here and mee-mee-mee there, and you’re back in gloriously silly technicolour as if you never left.