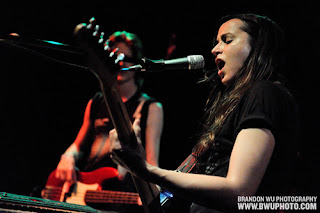 What a cool performer.
She walked onto the small stage of The famous Spiegeltent, to give it’s full grand title, in Hyde Park, Sydney, and while quiet and unassuming with a spoken voice barely above a whisper, she commanded attention straight away, her normally quiet folk pop given some extra grunt by her excellent band. The set itself was quite short, only running for a shade over one hour, in common with most concerts in the Spiegeltent. I was mesmerised from the start – here’s a singer I knew little about last year when I first booked to see her sans band (I had to forgo seeing her when I fell ill), but who, thanks to an execellent LP & EP, had made her way quite emphatically into my iPod playlist and stayed there. Her songs are mostly soft gentle pop, but that belies the often hard edged lyricism, and her willingness to use the songs to fight any number of battles including Prop 8 in California, which sought successfully in the end to get gay marriage banned in that state. She introduced the song that addressed this issue, Prop 8 Rapids (I think – one down side of her soft spokenness was the tendency for all manner of comments by her to be lost in audience applause, or even missed in the quieter moments) by saying “Prop 8 is still an issue, and so I keep singing this song.” 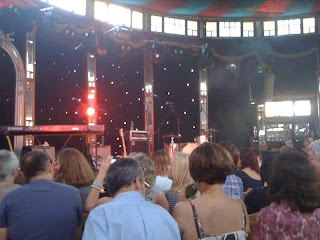 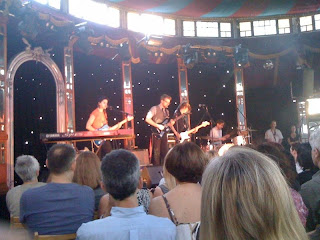 Her battles may be mighty but the melodies are sweet and lush and heartfelt, the musicianship superb, and her sense of self, as a person and artist, very much in evidence throughout. I wanted to see at least one concert in the Spiegeltent this Sydney Festival and I am glad it was her concert I got to see. She is a one musician worth listening to a lot, and keep an eye on as she is bound for great things.
Check out her fabulous song, Sweet Dreams, my favourite:
http://www.youtube.com/watch?v=tKTYSc1CKuw