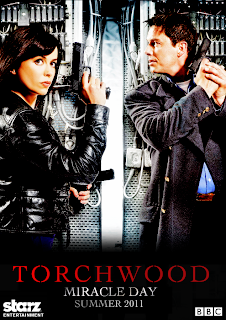 I have loved Torchwood since I rushed to see it’s first episode the moment the good folks at Dr Who announced they were doing the first of what’s become a flood of spin offs (most not aimed at my demographic, sometimes not even Dr Who it seems these days, thank you Matt Smith and your juvenile prancing around) and I adored it’s bleak, morose atmosphere which it balanced, somehow, thanks to the rapport between the Torchwood team (which became quite a lot more for Dr Jack and Ianto, which was heartening to see), with warm camaraderie-filled moments. This was one of those once-in-a-million shows that had crackling story lines, rich deep characters, and believable moments of humanity even in the midst of the most fantastical of situations.
And now? Well, now, it’s still brilliantly written, and it has to be said the current story line is chock full of twists & turns, darkness and light (mostly impenetrable darkness), and narrative plot twists to keep you utterly engaged such that you crave the next episode and rush to watch it, and yet….
… and yet, I have two downloaded (from iTunes, thank you) episodes burning a conspiratorial hole in my iPod, and I am almost glacial in my willingness to watch term. which saddens me. I mean, the current series is not bad TV at all; in fact, it’s very good, beautifully produced TV, more than a cut above much of the dross that washes over our cerebral cortex and threatens to turn it into pretty-coloured mush, and I should LOVE it…. but I don’t… it’s lacking that precious something that makes me race to watch it, love it, talk about it over the water cooler at work…in short it’s lost it’s heart and soul, and for a show like Torchwood, which had it in quirky but real spades, that’s a major loss.
Oh I will keep watching it but more out of obligation and a sense that I have watched much of it already so why stop now, but will I love it? Sadly I don’t think so. 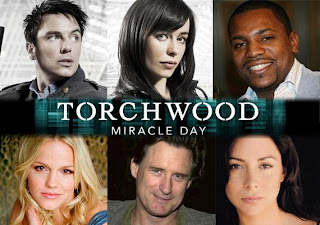