WATER FOR ELEPHANTS is a movie that surprised me completely. I had expected a love story, set in a Depression-era circus travelling across the United States, and while that is in part, largely what I saw, it was also a movie with great cruelty (both to animals and people), sociopathic behaviour (by the circus owner, August, who is emotionally very unstable, and the husband of Reese Witherspoon’s character, Marlena who rides first the horses and then the titular elephant in her act), and great sadness as some unexpectedly terrible things happen. 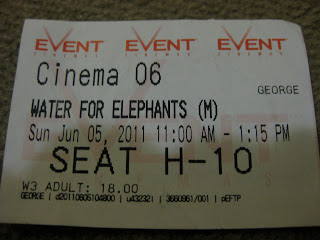 But overwhelmingly it is a visually lush, emotionally touching movie, that sticks to the premise, however unrealistic, that love will win out over all else. In the case of the characters of this movie, the ‘all else’ towers menacingly above their lives with everyone from Jacob (Robert Pattinson, who apart from being beautiful to look at, brings some impressive acting chops to the role) who loses his parents, his dreams, and any hope of the life he expected in quick succession, to Marlena, who lives with the mercurial and often quite cruel August, simply because he is a better alternative to the foster homes she grew up in where she felt like a nobody, to well almost all the performers and workers in the circus, all of whom love what they do, but always with a eye on the underlying instability of August’s often despotic rule. But win out, against all these obstacles, it does, even managing to rescue the life of Jacob, who, many years later in his 90s, rejoins the circus to escape his blighted existence in a nursing home.

I loved it from start to finish. A wonderful movie that draws you in, and keeps you there.

From the 1930s, we jumped to the 1940s for this X Men prequel, which does a brilliant job of explaining how the mutants ended up forming into two adversarial camps. Rather than being just another shallow Hollywood blockbuster, more concerned with action and impressive CGI than substantial narrative and well-developed characters, this movie managed to be both  full-on action and tell us story suffused with grey and the ambiguities of life. 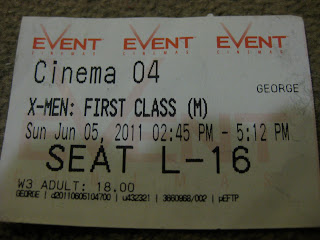 From the opening scenes where Erik Lensherr (later Magneto) watches his mother die at the hands of a sadistic concentration camp doctor, and embarks on a life dedicated to protecting who is, and those who follow him from the enemies all around him (real or imagined) at all costs, contrasted beautifully with the life of privilege and learning of the man eventually known as Professor X. The movie leaps from these formative years to the 1960s during the Cuban Missile Crisis, which is re-imagined as a nifty piece of alternative history where the mutants sway the course of action, and examines how a hand picked group of mutants came to realise they were different, and how they handled it (some well, some, um, not so well). Yes it is a little bit too earnest at times, but it does a great job of establishing who is who, and why without resorting to too many action movie cliches, and leaving you feeling as if your mind was as engaged as the gee-whiz-look-at-that-explosion part of you.