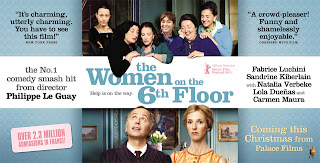 Women on the 6th Floor is a movie obsessed with class, race, money and power.

But wait, it’s not as grim as that sentence makes it seem. In fact, the movie is a delight focusing on the great changes that many Western societies saw take place in the early 1960s, when the movie is set.

While most film makers shy away from issues like class or race, especially in what is ostensibly a comedy, not so writer-director Philippe le Guay. His semi-autobiographical tale of a young Spanish maid who quite by accident upends a set-in-its-ways upper class Parisian household manages to weave a whole host of thorny untouchable topics into its story, and do so without being patronising or relying on superficial stereotypes. That’s quite an achievement.

It would have been so easy to rely on cliches, and plenty of movies have done that constructing movies that coast along on cheap laughs, and lightly constructed characters who are essentially one joke wonders.  But Women… charts a different course, touching on the cliches of course since it’s impossible to avoid them, but using them to construct a clever and engaging portrait of a society, and a family in upheaval.

The family in question is that of the Jouberts, headed by pedantic stockbroker, Jean-Louis (Fabrice Luchini), who is desperately bored with his existence, though he doesn’t know it yet. The barometer of how good his day will be is how well his boiled egg is cooked in the morning, which sounds petty but means the world to him in his suffocating sclerotic world.

His relationship with his wife Suzanne (Sandrine Kiberlain) is a mere shadow of its former self, and her world is filled with exhaustion, ennui and endless shopping trips. Her life in particular has become so predictable that Jean-Louis is able to tell her at one point exactly what she did when, simply because he knows what day it is. It is emotional intimacy so much as it is over familiarity.

Their relationships with their sons is equally emotionally distant with the boys away at boarding school most of the time. Even when they are at home, the family is at odds with itself, with no one party really knowing the other, or if the truth be told be told, caring to know. 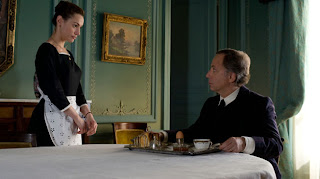 Into this fossilised existence comes the bright force of Maria Gonzalez (Natalia Verbeke) who arrives in Paris to join her aunt and a host of other Spanish maids, who are now in vogue as domestic helpers among the idle rich of early 60s Paris. She moves into the 6th floor of the Jouberts’ building, which they have owned for seeming millennia, where laughter and camaraderie are plentiful but the toilet is broken and other amenities are few.

Thanks to the departure of the Jouberts’ old maid from Brittany, who leaves in disgust at the family’s coldness towards the death of the family matriarch, Maria quickly scores a job, and thanks to her winning ways with boiled eggs, scores the approval of Jean-Louis and his family.

But while she is a force for change in the Jouberts’ lives, she is no Mary Poppins, and harbours secrets, and sadness, of her own. Even so she and Jean-Louis, begin to see in each other the person who might be the key to the expression of the unspoken longing for a better life that neither can quite articulate.

It is however a long road to the realisation of change and involves upper class Jean-Louis growing closer and closer to the maids on the never visited 6th floor. It is not necessarily an attempt to gain the attention of Maria; Jean-Louis is, at heart, a decent caring man who treats the maids as equals to the surprise of those around him. 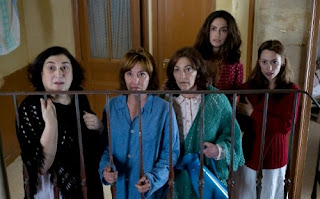 The joy of the movie is that no character descends into the murky depths of stereotype. Yes Jean-Louis’s wife is drifting aimlessly through life, and emotionally estranged from her husband, but when both she and Jean-Louis realise what changes are unexpectedly in train, she doesn’t revert to a ‘bitch’ stereotype. Her feelings and responses are treated with just as much validity as the more sympathetic characters like Jean-Louis and Maria, which is a rare thing indeed.

Similarly the maids are not treated as simply Spanish peasants come to the big city to make good. While they are presented as the ebullient antidote to the Jouberts’ joyless existence, they are not portrayed as celebrating simpletons, unaware of the dark complexities of life. Their lives are shown to be as complex and layered as anyone else’s in the movie and they are never simply caricatured foils for their Parisian employers. They ‘rescue’ Jean-Louis in a great many ways it’s true, but he also goes to great lengths to change their lives too, and their interactions throughout are those of equals who simply happen to be from different countries and societal strata.

But this is no preachy movie despite the lessons learned. Yes it is about class, race, money and power. But it’s also funny, touching, and heart-warming in that non-syrupy sweet way that Europeans seem to manage so effortlessly. Above all you will appreciate that regardless of the differences that divide, that it is basic humanity that, in the end, will always out and that binds us together.

And you will laugh while doing it. You can’t really ask for more.