Let’s get that out of the way from the get go. Perhaps it stems from studying French for six years at high school, or my enduring love of French pastries (unlikely that an unhealthy preoccupation with almond croissants would lead to an appreciation of French artistic expression but you never know), or the hilarity of Pepe Le Pew cartoons (OK let’s rule that one out now – he’s funny but hardly a cultural imprimateur oui?), but I love French movies.

They are usually eccentric, clever, artistically bold and emotionally nuanced efforts, and while like any cinema industry, they have their fair share of duds, they more often than not succeed in crafting movies that emotionally impact you, or amuse you, or get you thinking, and that makes a refreshing change from many of the banalities that Hollywood pumps out. (That last phrase makes me seem like a cultural snob, which I am not, enjoying Hollywood blockbusters as much as the next man; well as long he’s French, literate and ready with a bon mot and a croissant at the drop of a hat!). 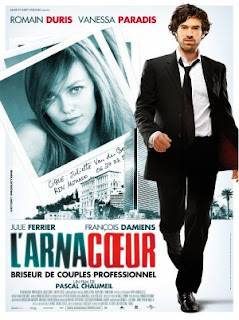 Heartbreaker (L’arnacoeur in French – (saw @ Palace Cinemas, Leichhardt, 8 January 2011), while a romantic comedy, a genre that suffers from cliched Hollywood-itis more often than it doesn’t – which is not such a bad thing since you want romantic comedies to end a certain way so cliche is part and parcel of the package; unfortunately, this often translates to creative mediocrity and creative laziness – was full of the sort of joyful verve and comedic fun that I have missed in many of Tinseltown’s latest romantic efforts. Some of the character types were obvious – the bumbling, well meaning assistant for instance – but they were played with such fun by the cast, who had the benefit of a well paced, witty script, that it didn’t matter. It did have the requisite happy ending but I would have been displeased if it hadn’t. As I said this is one genre than needs the cliches and in the hands of the right script writer and director, they can be fresh and fun.

Heartbreaker had all this and more, and was a bundle of fun to immerse yourself in, especially watched at Palace Cinemas Leichhardt, which excels in offering a great cinematic experience – lovely foyer, curtains across the screen, relaxed ambience. So very French non?